The following works are labeled with title, team members, and for many, an associated PDF file and white paper. All maps are (c) Copyright their respective author teams unless otherwise indicated.

Interstellar: To boldly go where no one has gone before. Irene Cortes, Lincoln Shand, Nav Matharu, Adam Oliveira, Copyright 2018. Without dispute, reaching for the stars is not essential to our survival. Its purpose may, however, be more intrinsic – understanding our purpose in the universe (Saegan, 1997). Why are we here? Where is our place in all of this? As an intelligent species, certainly there must be more to it than just survival. And we want better answers than religion can give us. 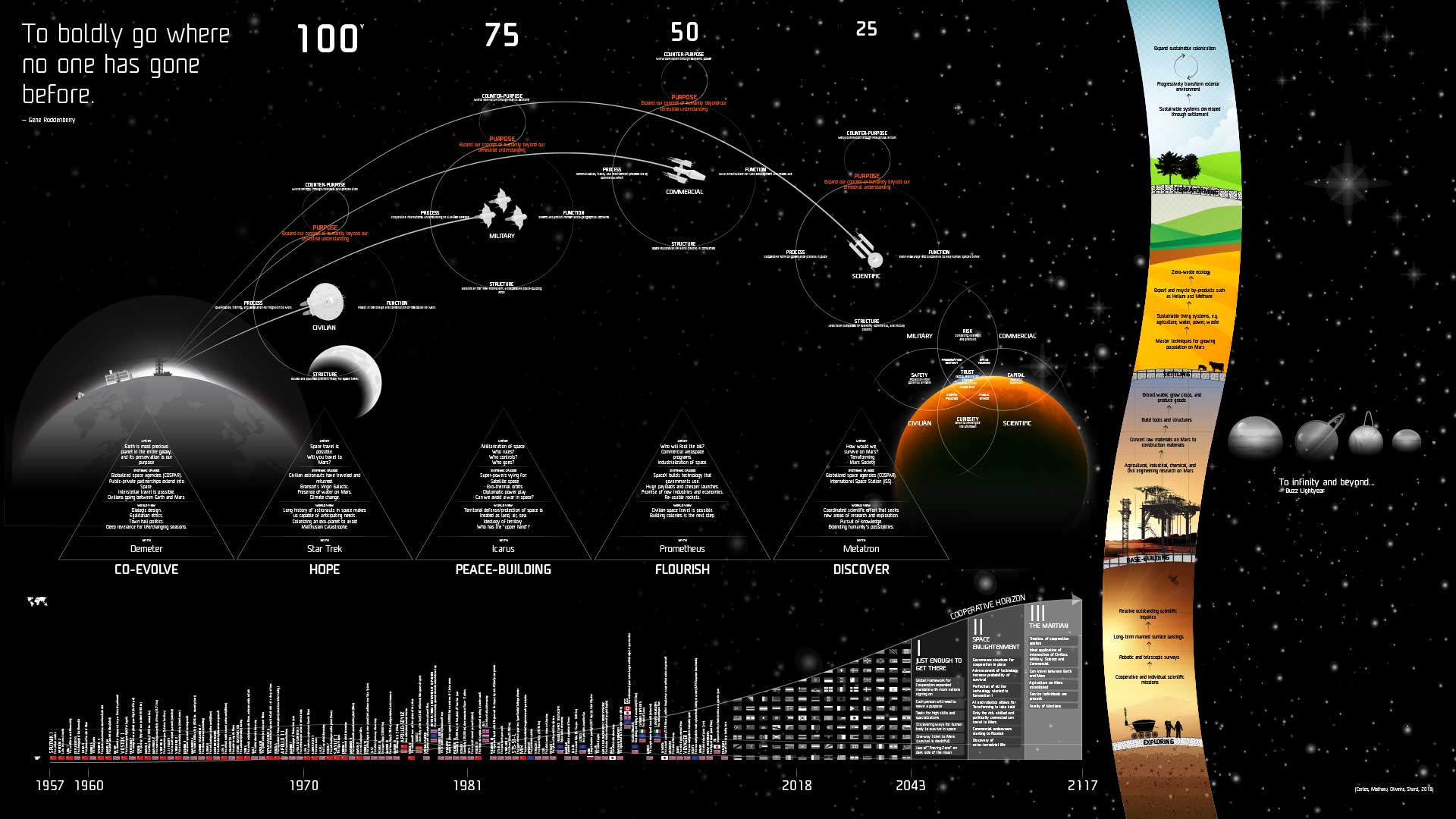 A Proposed Evolution Towards a Biomimetics [AI] Learning Framework. Nadia Abuseif, Jen Wilson-Lee, Nicole Norris, Copyright 2018. The following systems map looks at developing a biomimetics pedagogical framework within a time-line that will span multiple generations. The goal is to achieve purpose-driven innovators through education pathways that focus on developing knowledge through purpose-seeking. 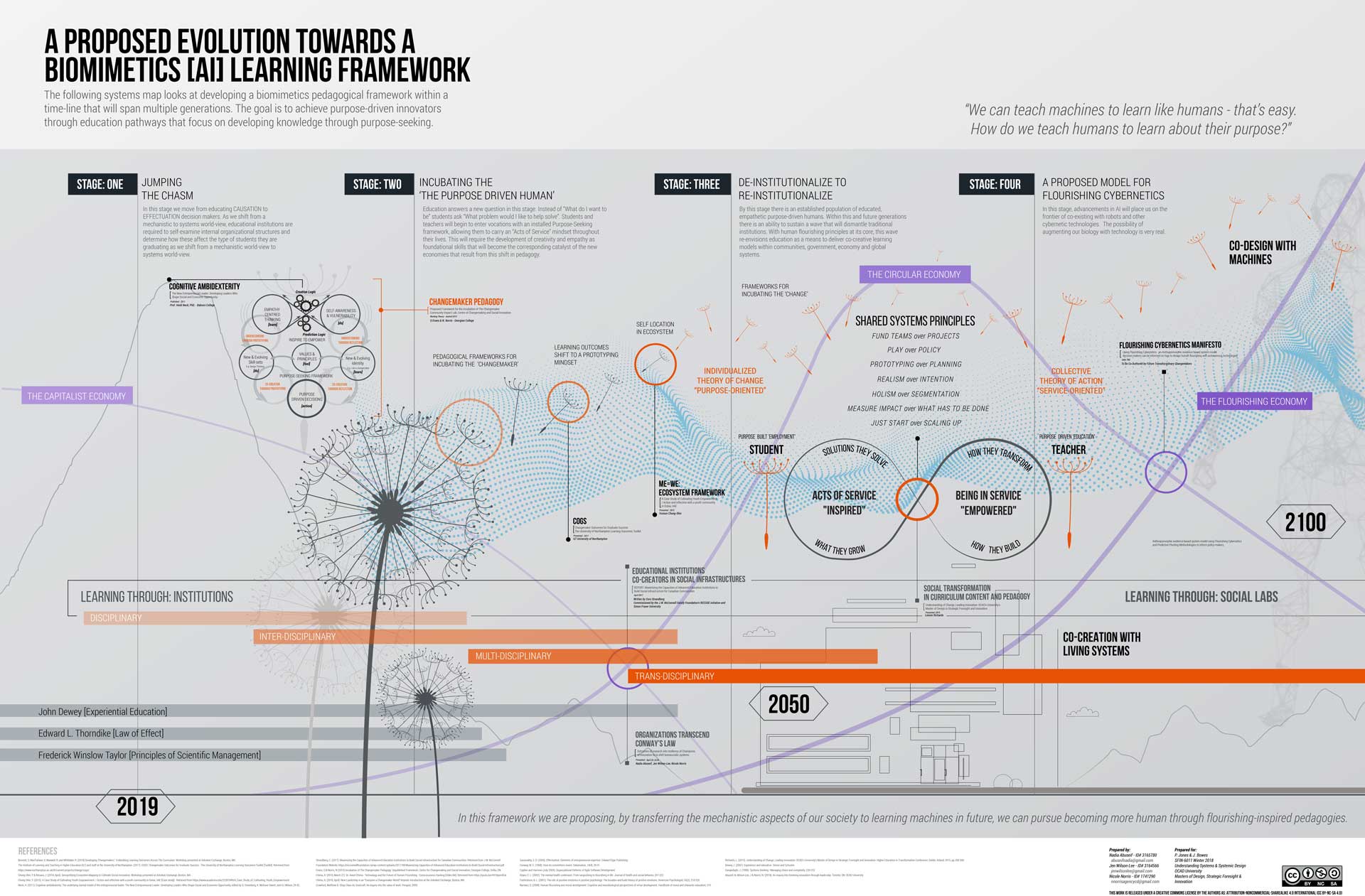 Do The Guards Need Guarding? Kate Gaffigan, Ryan LeBreton, Kristen Webster, Copyright 2018. There is rising friction between police forces and citizens in America, as police forces have increasingly become more concerned with protecting themselves and mislaigned with the wants and needs of the public. Police brutality against black men, riots against the police, social citizen surveillance, and publications of police missteps on news media are increasingly becoming more commonplace. Despite increasing violence against citizens, police officers are rarely held accountable by the system in which they operate. Police officers and citizens exist in an increasingly militarized and racialized system, which encourage a systemic reinforcement of a "us vs them" dialogue. Ultimately, this dialogue encourages the demise of a prosperous system, erodes civic content and gives way to subsequent issues.

For Better or For Worse. Ainsley Spry, Jenny Hwang, Robin Rucchin King, Silva Nercessian. Family law has some of the most difficult cases to settle as it encompasses multifaceted issues concerning divorce. The idea of divorce on its own does not accurately reflect the power it has to drive Canadian into despair through the tribulations of spousal support, child support and custody, and division of assets and liabilities due to divorce. Unfortunately, most citizens do not qualify for legal aid and the federal Divorce Act is out of touch with today's reality. Women, especially low income and disadvantaged, are the most negatively impacted by divorce. 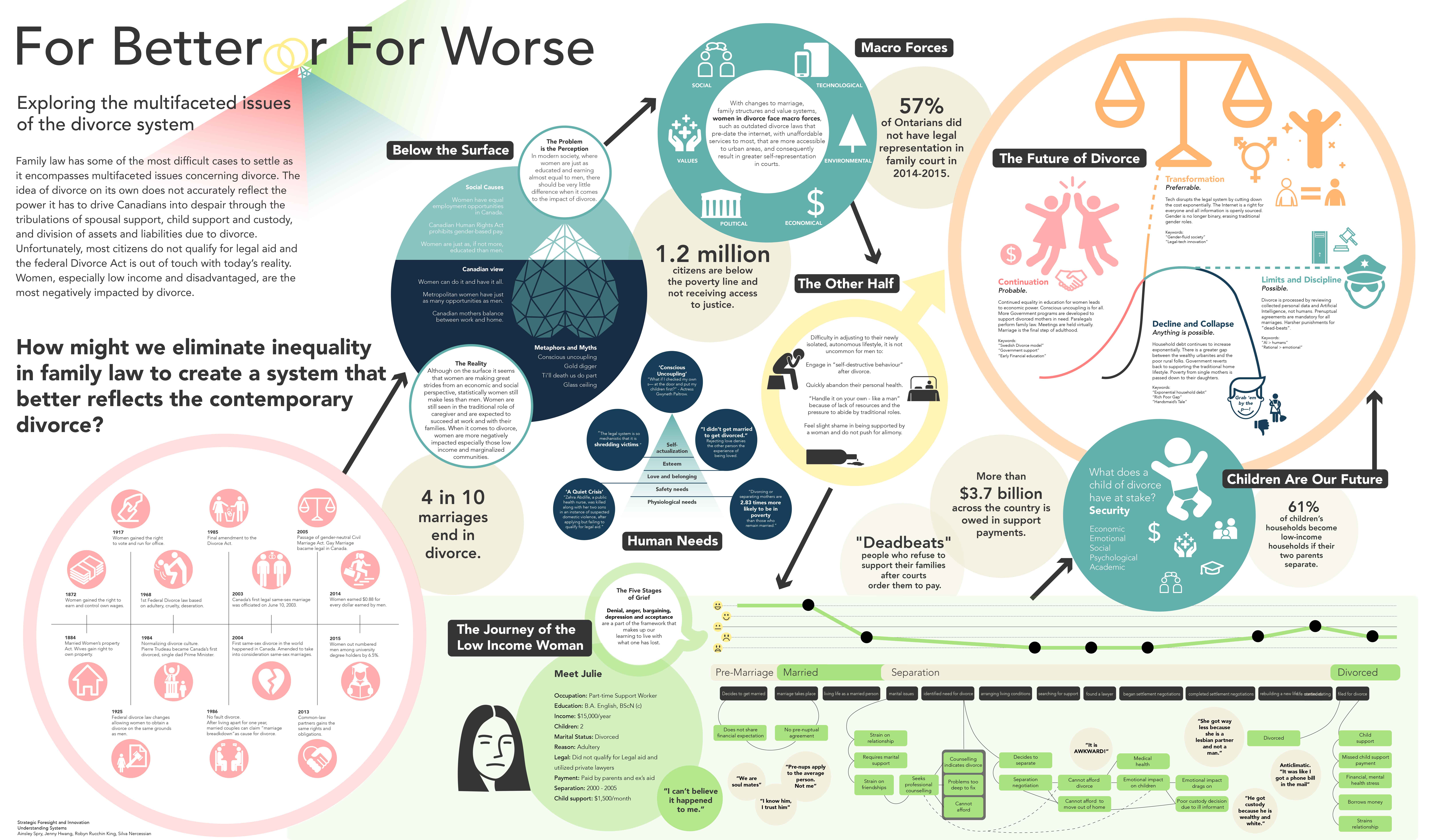 Media & Meaning. David Akermanis, Tamara Daniel, Jordan Ostapchuk, Dragna Savic. News media is more profit-driven, personalized, and polarizing. Changes in technology are colliding with our statit habits, causing us to mistrust what we read and ignore what we don't  like. If the medium is the message, what message are we sending? How do we sensemake in our modern media landscape? In response to these questions, we mapped the media mess and propose five possible futures for regarding control over our media, our minds, and our ability to make sense fo the world around us. 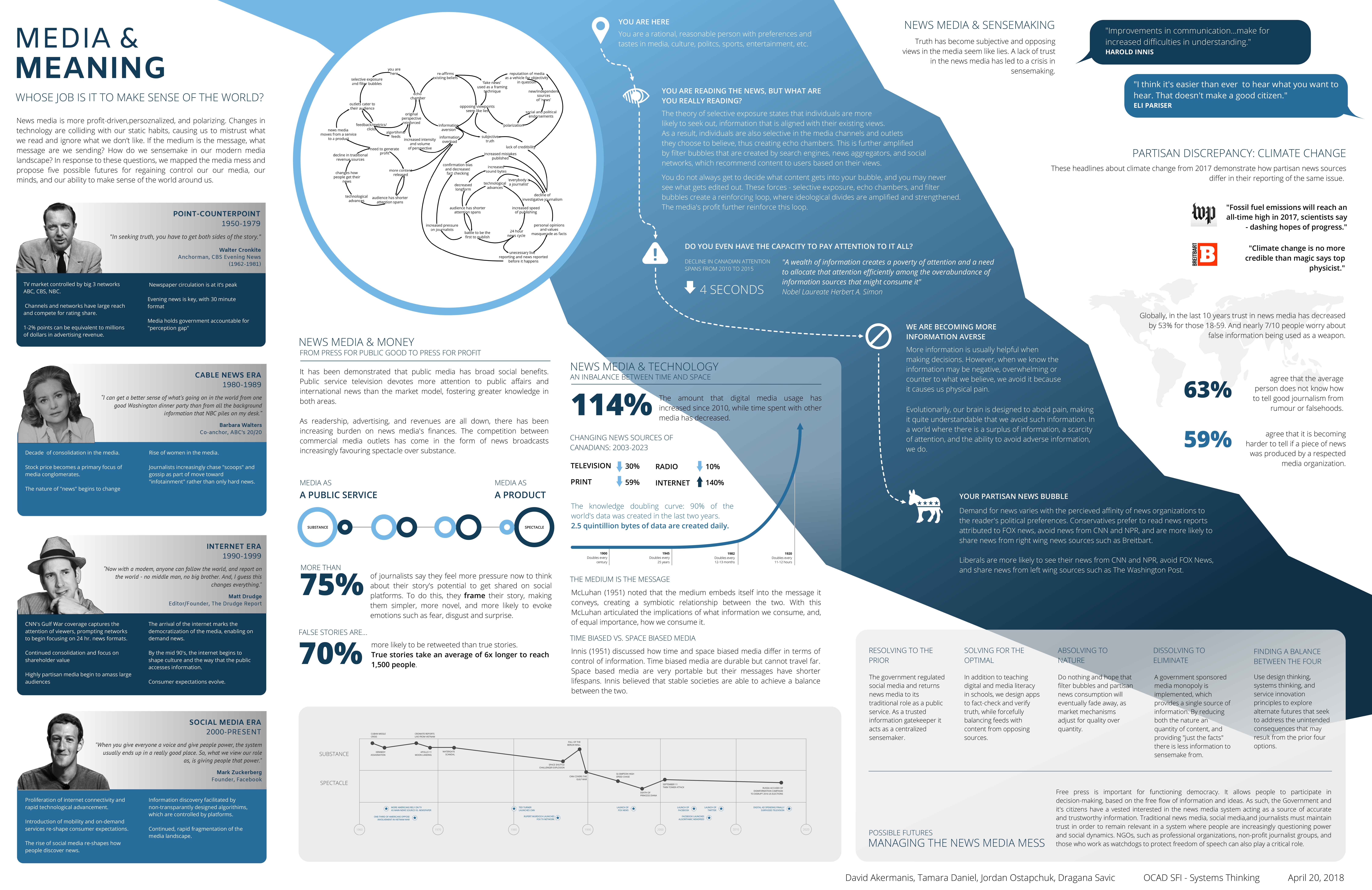 The Pluriverse of Design Education. Tara Campbell, Ariana Lutterman. Designers have enormous influence on the world at all scales. Design education is one key way that designers learn design. This map takes a critical look at design education, asking how we might navigate towards a preferred design education landscape. 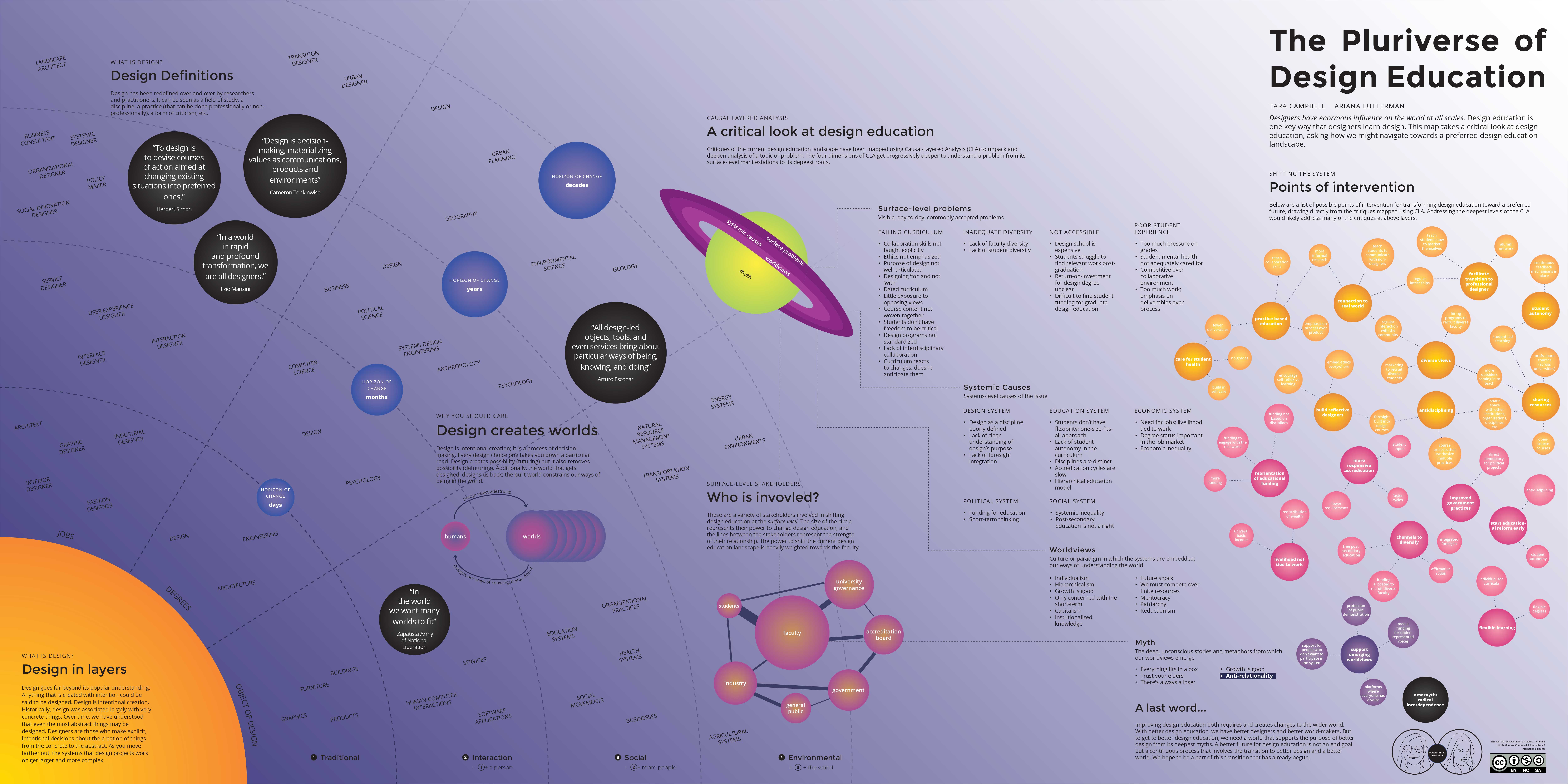 Canada - Building through Addition, not Multiplication. Jananda Lima, Tieni Meninato, Alex T Selkin, Ali Shamaee. Why does Canada need immigration? - The standard population pyramid is on the way to get reversed in Canada, despite the offsetting effect of immigation. Demographic processes have inertia to them, and Canadian rates of birth are lower than necessary for population replacement. Canada, given its demographic structure, needs immigration to increase its labour force in the short term so as to sustain the costs of its social programs. 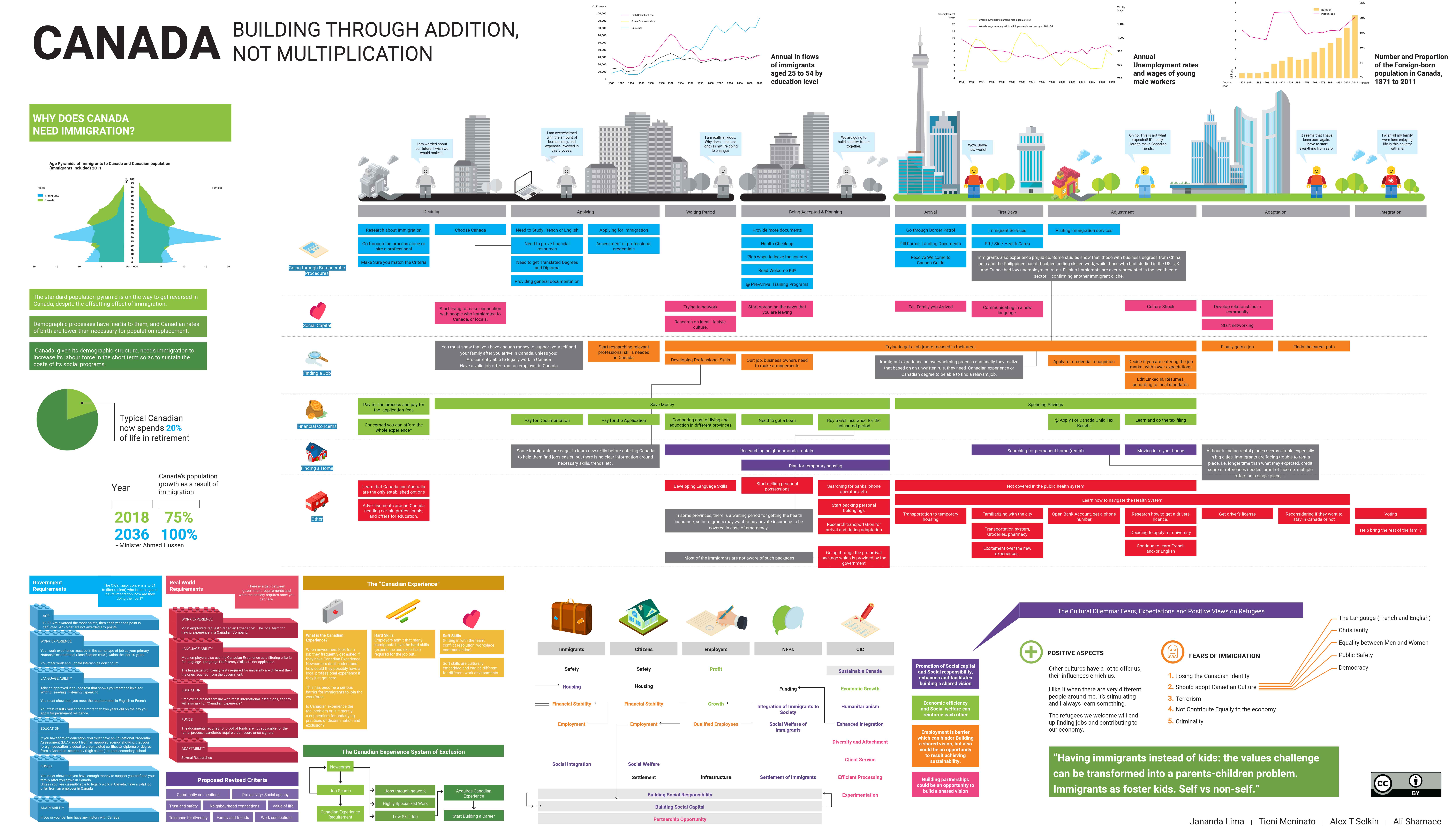 The synthesis map attempts to paint a clear picture of the role and power dynamics between the major stakeholders in the Canadian housing system, and also reveal the signals of change indicating that these dynamics might be changing for the better. It should be noted that the information on this map are presented from the lens of the Toronto housing market. 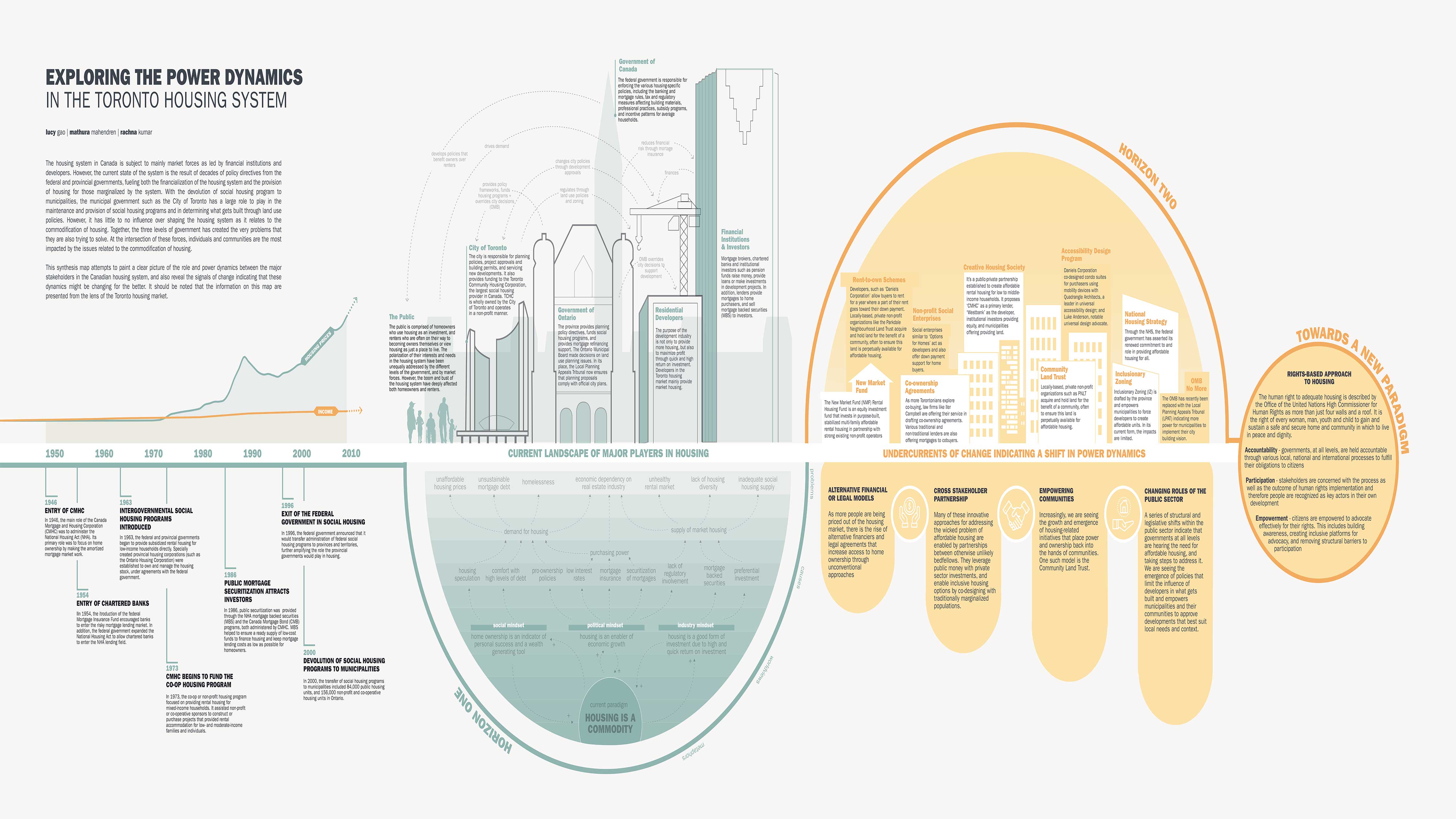 From eco-burials and low cost life celebrations, to cryogenics and online memorials, how we deal with death is undergoing a profound transformation. What do these shifts say about our chaging cultural values? 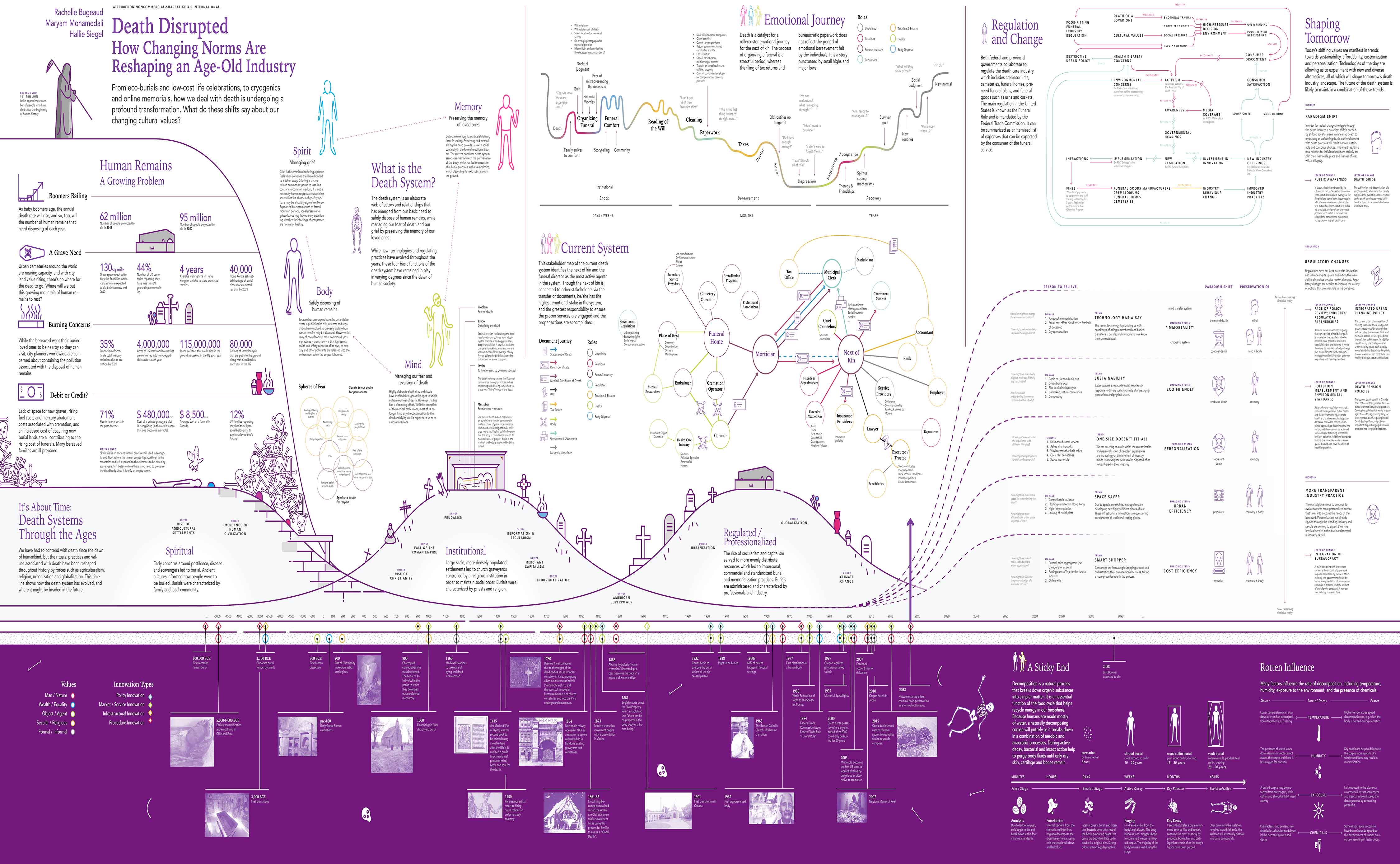 Note: all works on this page are copyrighted by the respective authors and are not Creative Commons.