Focusing on urbanization as a key regional and global driver of change, we asked this 'triggering question':

In the face of increasing urbanization worldwide, what future challenges
do we anticipate for Southern Ontario, now through 2030?

In response to this question, the Expert Panel identified 91 challenges.

Our Top Ten list are those challenges are those which are most influential on the other challenges, and most highly related to the triggering question, according to the Expert Panel

The panel produced a total of 91 challenge statements in response to the Triggering Question. In facilitated discussion, participants clarified the intended meaning of their statements, and were given opportunities to revise or withdraw them. In an open vote (dot voting technique), 13 challenges received 3 or more votes. To isolate the top ten and investigate their interrelationships, a further participatory process (pair-wise voting) enabled inference of relative influence among the top 13 challenges. The three challenges that dropped off were those that were judged in influence map voting as having the least relative influence on the others.

The Influence Map shows a pattern of challenges based on systemic influence as judged by participants. The relative order was reached by the method of “root cause mapping”: challenges mapped at the deepest levels (Level V and IV) are recognized as having the most leverage on other challenges. Our rank order for the Top Ten begins with the “deepest” or “most influential” challenges as number 1, and proceeds to “most influenced” as number 10. The top three challenges at the deepest level of influence are mutually correlated, forming a “cycle.” Notice that some challenges with a higher number of votes were not seen as highly influential. Influence mapping reveals that the issues with highest awareness or popularity among participants may not be those with the most influence on other challenges. 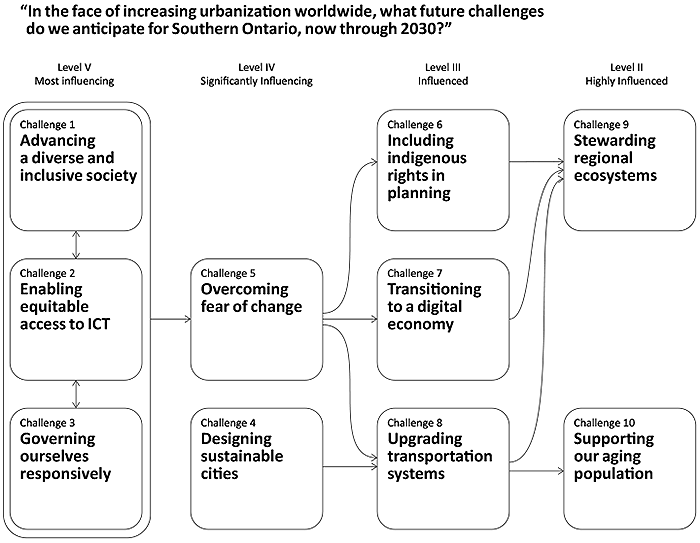