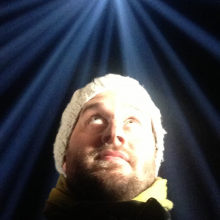 A professional futurist and experience designer, Dr Stuart Candy is an associate of the Strategic Innovation Lab, director of the OCAD U Situation Lab, and was tenure-track professor of design in the Strategic Foresight & Innovation and Digital Futures programs 2013–16.

Stuart's collaborative Experiential Futures practice brings possible scenarios to life through tangible artifacts and immersive situations. He has staged projects cutting across foresight, design, and transmedia storytelling, in settings including South by Southwest, the California Academy of Sciences, Burning Man, the streets of Honolulu's Chinatown, and online.

Working across discipline and industry boundaries, Stuart is often sought out for involvement in unusual strategic initiatives. He helped to found the Festival of Transitional Architecture (FESTA) in post-earthquake Christchurch, directed the first "serious game" funded by the US federal CDC, and advised the Future We Want project for the United Nations Rio+20 Summit. Prior to joining OCAD U faculty, Stuart was the Foresight and Innovation Leader for the Australasia region of global design and engineering firm Arup, in which capacity he led a multidisciplinary review of the Singaporean government's national sustainability and liveability blueprint for 2030. He also devised and ran a process for the public to co-create a digital strategy for the City of Melbourne; the University of Oxford subsequently engaged him to run a similar process there.

Other clients and partners from over a decade in practice include the UK's National Health Service, the Sydney Opera House, Wired magazine, the State of Hawaii, IDEO, Institute for the Future, General Electric, and the Australian Academy of Science. He presents regularly at international conferences including AIGA (Phoenix and New Orleans), TEDx (Christchurch and Black Rock City), INK (Mumbai), IRAHSS (Singapore), and Amplify (Sydney). He is currently working on design of the Museum of Future Government Services for the United Arab Emirates.

He holds degrees in law and the history and philosophy of science from the University of Melbourne, and an MA and PhD in political science, earned under futurist Jim Dator at the University of Hawaii at Manoa, supported by back to back East-West Center Fellowships. Stuart has shared work and taught around the world at the Royal College of Art, MIT Media Lab, Duke, NYU, Berkeley, Stanford, Cranbrook, ASU, CEDIM Mexico, SciencesPo, Politecnico di Milano, Parsons Mumbai, and the National University of Singapore. His OCAD University graduate students have won several awards for projects produced in the core SFI "Foresight Studio". Previously he created the Strategic Foresight elective for the Design MBA at California College of the Arts, San Francisco.

Stuart also directs Situation Lab, a research unit co-founded and run with Dr Jeff Watson of USC's School of Cinematic Arts. ​In 2014 the two designed an imagination card game called The Thing From The Future, an official selection at IndieCade games festival, more recently distributed to all 500 delegates at the 9th UNESCO Youth Forum in Paris. The game has been recognised with a 'Most Significant Futures Work' award by the Association of Professional Futurists. OCAD U Sitlab has also undertaken consulting engagements for the United Nations Development Programme, Elections Ontario, Interface Inc, and the National Film Board of Canada.

He blogs at the sceptical futuryst and can be found on the tweets as @futuryst.